An Interview with Matthew Scott 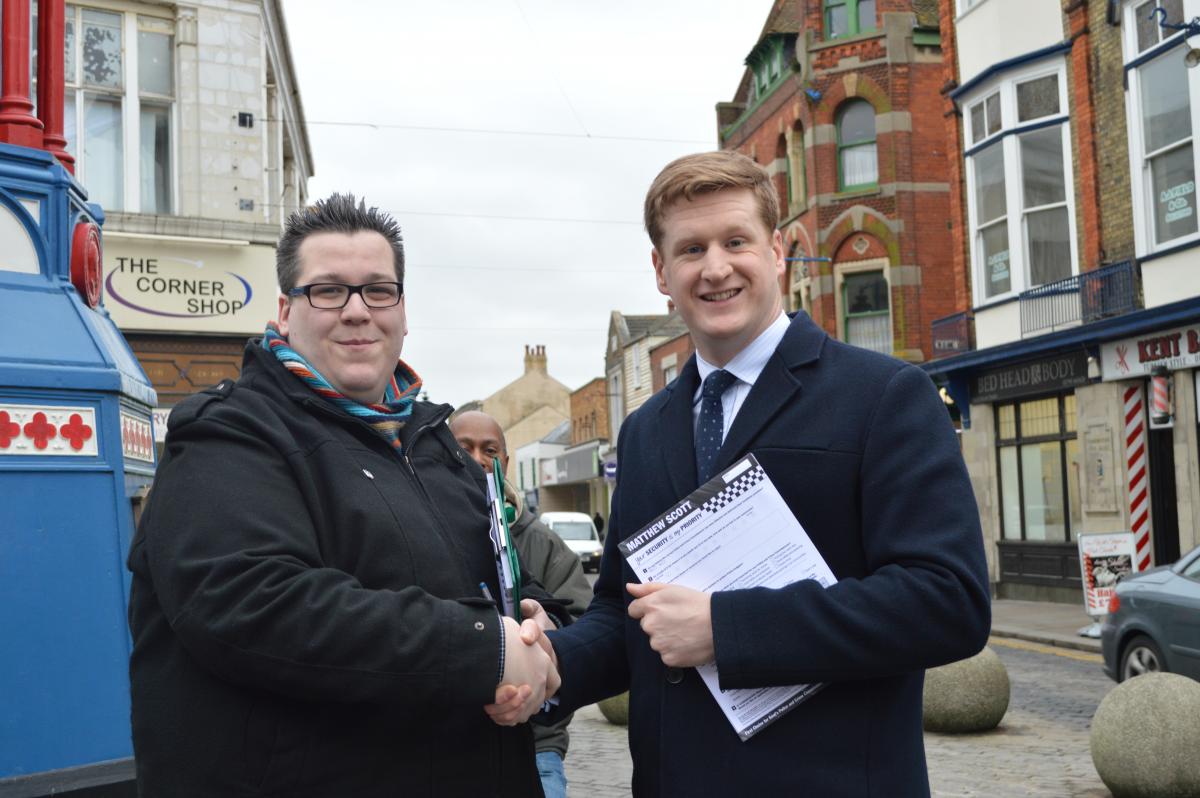 Matthew Scott is a man with a plan. A six-point plan in fact, and one that he hopes will win him the post of Kent’s Police and Crime Commissioner when the county goes to the polls in May this year.

The position was introduced in 2012 and has become famous for all the wrong reasons, thanks to the seemingly never-ending negative media coverage about the current PCC Ann Barnes. Her car-crash documentary on the role prompted Kent Police Federation to complain she had made the force “a laughing stock” and then there was her well-publicised lack of the correct car insurance that almost landed her in court.

But while Mrs Barnes has made sure her personality is key to the role, Matthew plans to focus on policy and is already touring the county to meet as many residents as possible and find out their priorities and their concerns.

And the 31 year old had a head start in putting his manifesto together, as his brother is a serving police officer in London and his father a retired chief inspector.

He said: “Growing up, I always had an immense sense of pride in what my dad did. Every day he went to work he was putting himself at risk to protect the public.

“I learnt a lot from his experiences. He did get commendations for some of his work and I knew there was always the risk that he could be injured.

“I have discussed my plans with both my father and my brother, but I’ve also spoken to a lot of different people about how I can achieve it, including other retired and serving police officers as well as members of the public.”

While Matthew’s brother followed in his father’s footsteps, first as a Police Community Support Officer and then police response driver, he was always more interested in helping people in a different way.

As well as running an MP’s office in Westminster, he has served as a councillor and school governor, led a community centre for three years and been involved with the Scouts as a group leader and voluntary media development officer.

Matthew said: “From a young age I have been politically minded so that is the direction I decided to focus on.

“I have a good understanding of policing culture but my record is helping people and that experience will be useful in the role of Police and Crime Commissioner.”

Matthew was selected to be the Conservative candidate for the PCC elections, after his predecessor Craig Mackinlay lost to Ann Barnes in 2012 but went on to win a Parliamentary seat in Thanet South, beating Ukip’s Nigel Farage.

He said: “I think now is the time, because people have more of an understanding of the role and what is needed.

“I want to focus on policing not personalities, and to be positive and talk about my plan. But I am challenging the Commissioner on some of the things that have happened on her watch, including a reduction in firearms officers.

“My manifesto is realistic, and I want everyone to feed into it so it can reflect what people in Kent want.”

Setting priorities that work for the whole county could be a daunting prospect but Matthew has already identified several common complaints, including speeding in rural areas, and plans to investigate ways to provide improved police support.

He is also keen to review Kent Police’s mental health policy in a bid to improve the way people experiencing mental health difficulties are dealt with.

Matthew said: “A quarter of the cases police deal with now are related to mental health, and not always because there is a criminal element.

“Sometimes it ends up with vulnerable people being detained and that can have a detrimental impact on them and even make the problem worse.

“I want to see how we can deal with the issue in a better way so people receive the support they need.”

Support for Matthew comes from his wife, herself a serving councillor, as well as the rest of the family, and he is optimistic about the future.

He said: “People have been very positive so far. They want someone who is going to listen to them.

“I think it’s important that I can show them the positives of the role and the possibilities for what I could achieve as Kent’s Police and Crime Commissioner; their representative overseeing the police force.

“While most people will hopefully not be a victim of crime, they need to know there is someone there who is going to review the procedures and make sure the police and justice system works for them, not the criminal.”

Read Matthew’s six-point plan or find out more about his campaign at http://matthewscott.org.uk/